Running Post: Book reviews by people who haven't read the book, and other various threats.

By Julie May 16, 2018
I figured I ought to write a post like this so I have a resting place for all of the "reviews" and threats of people who haven't read the book. This post will be updated as I'm motivated to share these little joys with you.

Regarding the book, these folks all seem most concerned about:


A couple of things.


You don't have to like the book. It's not everyone's cup of tea. But I have this crazy idea that you should read a book before you "review" or make claims about it.


I think my favorite alluded review/interaction regarding the book will always be Jarod's. I wrote about our messaging exchange earlier. He said, at one point, that "I had no idea this website or book even existed, looks like I'll need to find it in a used book store and review it."

I salute that guy. He made my day. Succinct, pointed, subtle slams on multiple levels. He has the gift. Let's take a look at some others, though.

This was posted the first week of February 2018. The woman had not read the book. Someone alerted me to her post.

"...the ongoing fight for justice for our Missing and Murdered Indigenous Women, it is concerning that this white woman in Bismarck would be encouraging more violence and hatred against us...simply because she feels threatened by our stand against justice."

Bless your heart, no. At no time do I encourage violence and hatred against Native Americans; quite the opposite, in fact. As you'd know if you...read the book.

There are a lot of things I could say about the claims in this "review", but I don't feel like wasting my time.

Readers of the book will be familiar with the word wasicu. I've got a whole essay dedicated to it.

At this point, random people are the ones telling me about these "reviews" because I'm not visiting these folk's pages anymore. Why? Because the book is done.


In the comments section of that post were these lovely ditties. The book they are giving one star to on Amazon is a previous book of mine, one they also did not read. (Which is why authors should view Amazon with caution.) 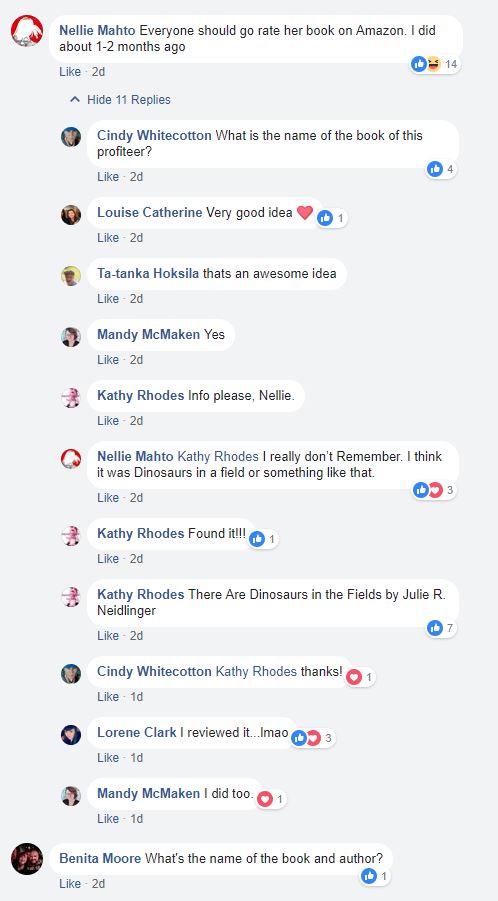 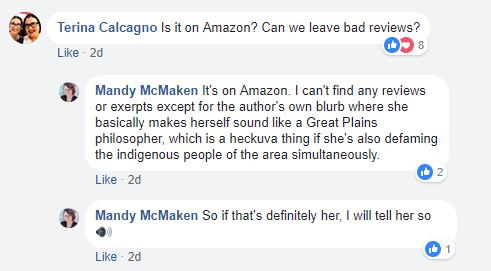 Here are a few screenshots of their bogus Amazon reviews:

LC is possibly Lorene Clark, as indicated in her Facebook comments.


And let's not leave out the ever-present lawsuit threats that I have repeatedly received for simply writing something they don't like. 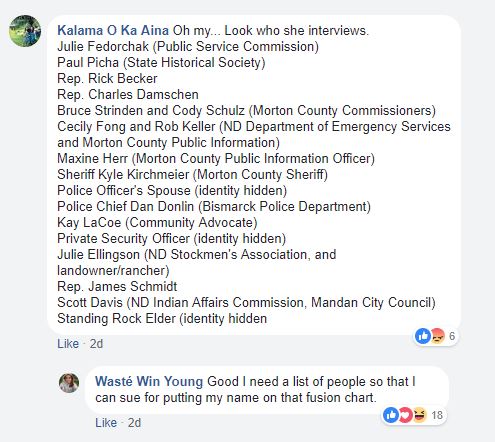 Look who I interview, right? How dare those people have a chance to tell their story and thoughts, right?! Some of what those folks said might surprise these protesters. The "fusion chart" referenced here is, I believe, the timeline. This woman's name appears in it based on Judge Boasberg's response and information, which I originally discovered early on via the--brace yourself--EarthJustice website. 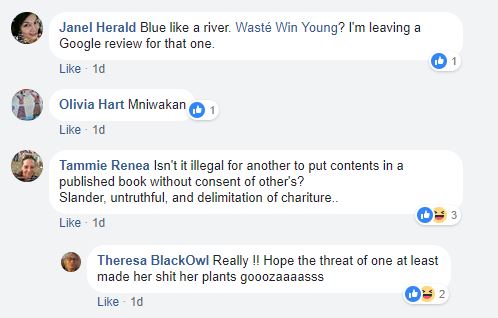 
This next one is one of my favorites, on so many levels:

I do want to leave you with a particular bit of elegance, because it certainly blessed my heart:

Dumb bitch? Out for the money? No credibility? Liar? Angry racist white woman, who is encouraging violence and hatred against a people group? Sounds like defamation galore!

Purchase a copy of "Blue Like A River: Burning The Bridge Between Red And White At Standing Rock" here.
Visit the NoDAPL Protest website for more information on the background and the book.

If there is a topic you didn't see in the book or would like additional information or support on, contact me and I will create additional content to answer your questions, as time allows, on this blog.
Comments on this blog are heavily moderated and will not be published if they are irrelevant, non-coherent, or abusive. Nasty comments and emails that I receive may be shared, unredacted, on this blog and used in later books.