Blue Like A River: Burning The Bridge Between Red And White At Standing Rock 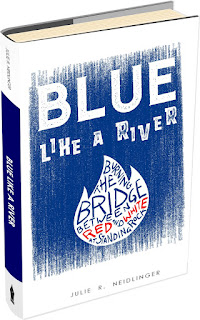 This book is about the protest against the Dakota Access pipeline that occurred between April 2016 and February 2017 in North Dakota.

This 446-page softcover book is printed in full color inside.

What This Book Is About

My goal with this was to address some of the troubling aspects that came out of this protest, as well as provide information and facts that weren't commonly known by many people who only knew of the protest based on various media sources. Since the story of the protesters and their camp life was constantly promoted by media, this book takes a different approach, and tells the stories of people in the community who were directly affected by this protest who didn't get a chance to speak. What you read will shock you.

The book is the story of figuring out the story, and uses essays and interviews to illustrate how I tried to better understand what had really happened and what it meant for the people who live in the area near the protest as well as the state of North Dakota.

The topics of the essays are broad. They discuss some humorous aspects as well as approach current activism, social media issues, mainstream media failures, private security, and the twisting of language to dupe people into buying into a protest they did not understand. These essays are based on my own experiences during the protest, as well as people I talked to and met during the protest.

Since media did a poor job of giving people whose story didn't fit the preferred narrative any chance at speaking without twisting their words, I chose to run the interviews in a direct Q & A format so you can read their words as they were spoken. You basically get to read the conversation I had with people without me trying to add narrative context to it.

The book contains interviews with the following people:


Every source and interview used in the book, even those who asked their name to be protected, exists and I have documentation (emails, notes, recordings) to back that up.

The book contains maps, a detailed timeline of events, and a summary of the "numbers" that pertain to the protest. There are also many full-color photographs of various aspects of the protest as discussed in the book.

The cover of the book has a blue square area that, upon closer inspection, is made up of words. These words are actually the titles of the many thousands of news articles that ran during the protest. The media helped fuel and feed this protest, and the words are an illustration of the sheer useless noise of much of that media coverage as far as actually understanding the story. The media coverage of this event did more to hurt a community and line the pockets of GoFundMe scammers than anything, and so, for this cover, their article titles serve as little more than a backdrop to the fire they helped fan.

In short, it would make the book more expensive. I have to mark the price up higher so that Amazon gets the bigger cut they demand. So even though you pay shipping here and it is "free" on Amazon, the truth is the price you'd pay on Amazon would be higher and in the end, it equals out. I explain more of that in detail here.

It is a softcover book, and it's quite thick. You can compare the size of its spine to a quarter in the photos below. It is wall-to-wall information. You will get your money's worth. 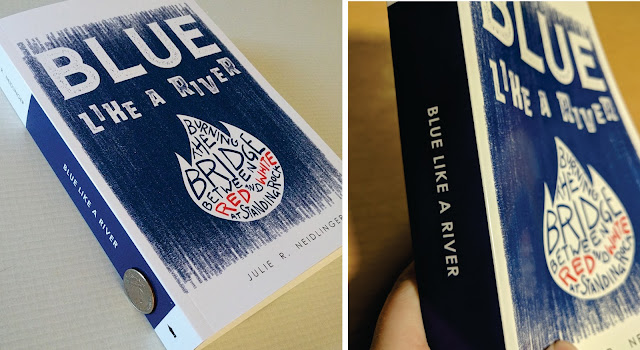 Purchase a copy of "Blue Like A River: Burning The Bridge Between Red And White At Standing Rock" here.
This blog is now an archive. The original website domain name points here as the original website is no longer online. If you have questions, feel free to contact me. The book is still available for purchase.